You are here: Home / Drink / Erie Beerfest at Wegmans 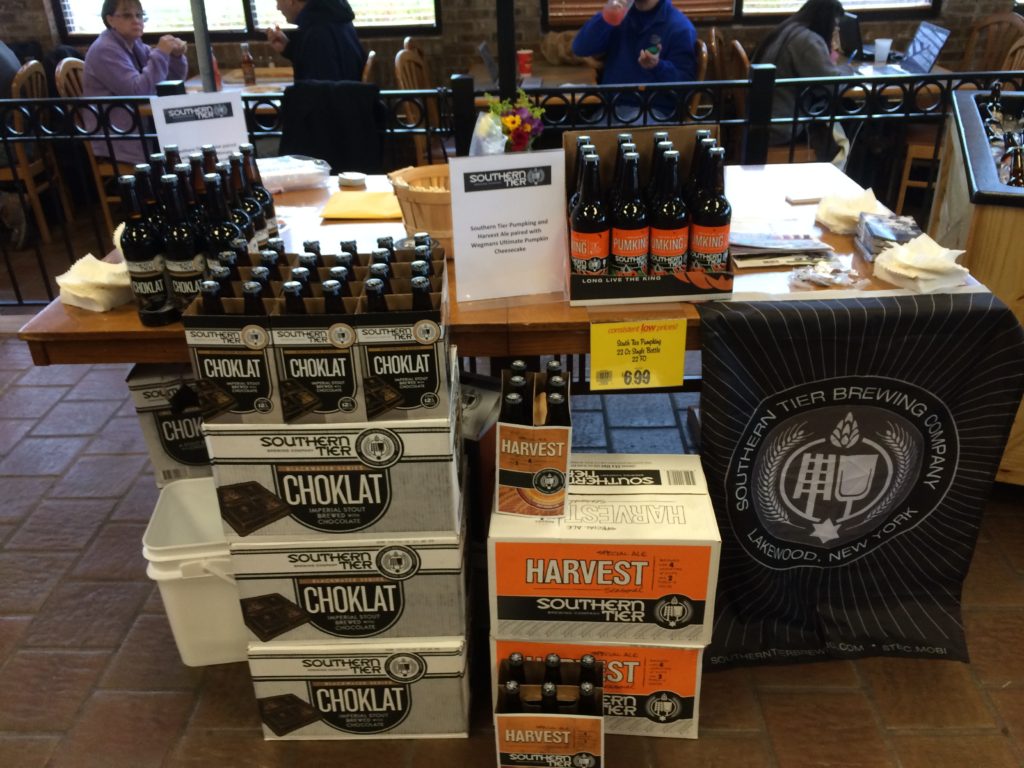 On Saturday (11/14) I represented Southern Tier Brewing Company at a fall tasting event held at the Peach Street Wegmans of Erie, PA. The event was held from 1-3 and it was complete with a live band. The occasion was well attended with over 100 people partaking. There were seven breweries participating. Each beer was paired with a complimentary item from Wegmans, including Erie Brewing Company, which feature their Johnny Rails Pumpkin Ale and Ol’ Red Cease and Desist Ale that were paired with Wegmans Tandoori Chicken Skewers.

There were other notable craft breweries represented such as Dogfish Head who was delivering samples of their 90 minute IPA. Also in attendance was Chicago’s Goose Island Beer Co.  They gave out samples of their Winter Ale that paired well with aged Gouda.  I salivated over the Aunt Feather’s Salted Caramel Torte which was matched up with Founder’s Porter, a robust beer with pleasant smokiness.  There was generous spread for revelers to enjoy at the event and it was all free!

I poured Southern Tier’s Pumpking and Harvest Ale, which were paired with Wegmans Ultimate Pumpkin Cheesecake. Additionally, we offered the Southern Tier Choklat, a creamy Imperial Chocolate Stout that has a deep bitter chocolate flavor which balances the slight sweetness to make for a pleasant drinking experience of a beer that is sneakily formidable (10% ABV). The Choklat Stout was paired with Wegmans Ultimate Chocolate Cheesecake. All of the tipplers I spoke with greatly enjoyed both pairings, many commenting that they would incorporate both beers into their holiday plans for the year.

The event was another classy example of how to give a high level of freebees to customers. Stay tuned, as I was informed by the Wegmans staff that there is another free tasting event in the spring featuring parings along with beers of the season.